Well known for his "depressing, and at times devastating"  music that brought attention to mental health, Onfroy employed styles and techniques that were unconventional in hip hop during his career, such as distortion and heavy guitar-backed instrumentals drawing inspiration from third-wave emo. This influenced fellow artists such as Lil Pump, Trippie Redd, Ski Mask the Slump God, Smokepurpp, Comethazine and 6ix9ine with the grungy vocals and lo-fi mixing of his early career. He was also credited with giving artists their first taste of fame and helping them with their careers through features and co-signs. Onfroy left behind what Rolling Stone called "a huge musical footprint" due to his impact on his young fanbase and his popularity during his career. Given his immense influence only to die young, the article compared his cultural impact with that of Ritchie Valens and Darby Crash.

When Onfroy was six years old, he tried to stab a man attempting to attack his mother and was eventually put into a youth program before being forced to live with his grandmother.

Onfroy's interest in music initially started after his aunt persuaded him to begin attending school choir and later church choir. He was soon kicked out of the school choir after attacking another student. Onfroy attended Margate Middle School from which he was later expelled after a series of physical altercations. He was subsequently enrolled into Sheridan House Family Ministries by his mother for over six months. Onfroy began to listen to nu-metal, hard rock and rap during his time at Sheridan House Family Ministries, which led to him to learn the piano and guitar.

Onfroy attended Piper High School until he dropped out in the tenth grade. He described himself as a "misfit" during that time, citing how quiet he was despite being popular and regularly involved in physical confrontations. Onfroy was not the athletic type and said that he was insecure and depressed during his time in high school.

On June 18, 2018, Onfroy was leaving the Riva Motorsports motorcycle dealership in Deerfield Beach, Florida, and, at approximately 3:55 p.m., was blocked from exiting the car park by a black Dodge Journey SUV. Two armed men exited the SUV and approached the rapper while he was sitting in the driver's seat. A brief struggle occurred, and the armed men reached inside Onfroy's vehicle, stole a small Louis Vuitton bag containing $50,000, and shot Onfroy multiple times. The shooters fled the scene in their SUV and Onfroy was transported by paramedics to the nearby Broward Health North hospital in Deerfield Beach, where he was pronounced dead. Onfroy's death was announced by the Broward County Sheriff's Office at approximately 5:30 p.m. Suspect Dedrick Devonshay Williams of Pompano Beach was arrested two days after the shooting, shortly before 7 p.m. Held in the Broward County jail, he is charged with first degree murder without premeditation.In the weeks following the event, three different people were arrested for their actions involved with the event, including trigger man Michael Boatwright.

In his will, Onfroy named his mother Cleopatra and brother Aiden as the sole beneficiaries of his estate. Onfroy's future child, with whom his girlfriend at the time of his death was pregnant, was not named in the will as it was written before the pregnancy.

Effects on the Rap Community

News of his death rattled social media and many fans expressed their loss and condolences on his passing while others shared a suspected video of the rapper immediately after his death. His death also caused a strange transformation among his fans and the public in general. Although his death was untimely and he himself was a victim of violent crime, many seem to want to absolve him of the crimes he committed during his lifetime. 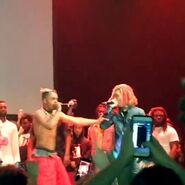