Complex called Uzi "one of those names to pay attention to in 2016", and Spin wrote "the 22-year-old has solidified his spot as one to watch...[with] his signature rapid delivery." Noisey called him "articularly charismatic", a "natural entertainer" who is "for better or for worse, yanking people into the future."

Lil Uzi Vert's style of rap has been compared to rock music, as well as being labeled with the term emo rap. He has also been described as a lo-fi rapper and compared to rapper Lil Wayne. 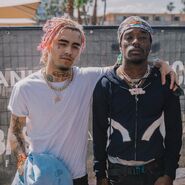